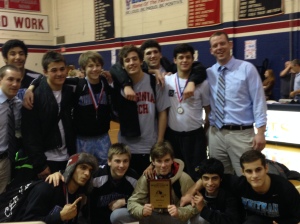 Twenty-two high school wrestling teams from Maryland and Virginia competed January 8-9 at the 23rd Patriot Classic Wrestling Tournament at Northern High School in Calvert County. This was an individual competition tournament rather than a multi-dual meet, but team scores were compiled based on points scored by the teams’ individual wrestlers. Whitman wrestlers competed in 11 of the 14 weight classes and the team finished third in the tournament, behind Oakdale (Frederick County) and Old Mill (Anne Arundel County) high schools.

Eight Whitman wrestlers placed in the top five in their weight categories, and no Whitman wrestler had a losing record in the tournament. Undefeated senior Mitch Fenton, the top ranked wrestler in the State at 152 pounds, took first place at that weight level, triumphing in the final over his Oakdale opponent, and senior Hamoon Shokoohinia, who came into the 145 pound bracket as the top seed, pinned his Herndon opponent in the second period of the championship match.

The other six Whitman wrestlers placing in the top five in their weight classes were:

Full details of the tournament results are published at http://www.thewrestlingtourney.com.

A write-up of Whitman’s performance in the tournament can be found in The Sentinel Newspaper at:

Whitman’s next match will be at home January 13 against the 2-4 Sherwood High School Warriors.