Posted on February 20, 2017 by cindyboinis | Comments Off on Whitman Places 2 Varsity Wrestlers on County Podium 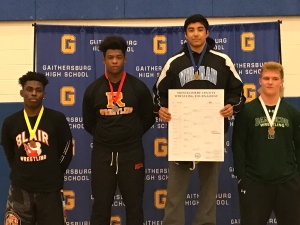 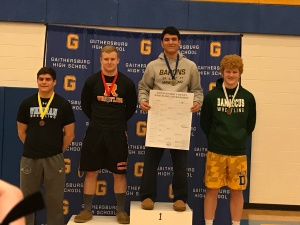 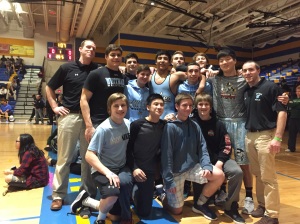 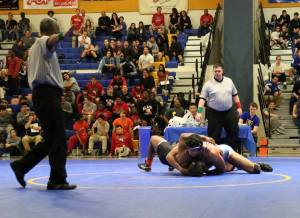 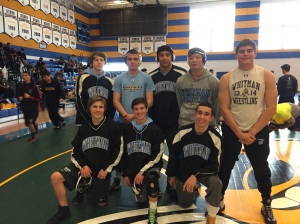 The 2017 Montgomery County Varsity Tournament was also held at Gaithersburg HS spanning two days over February 17th and 18th.  Just eight rather than fourteen of our Whitman Varsity entered the tournament this year because some of our Varsity wrestlers had chosen to participate in the JV Tournament the week before.

When the tournament seeding came out for our 8 Varsity participants, many of them did not receive seeding commensurate with their grappling abilities.  This is because the seedings are based on a point accumulation system that is, in large part, tied to the number of wins a wrestler obtains during his regular season and tournament action.  As most are aware, the Vikings were prohibited from participating in the Keaser Classic Tournament this year due to a scheduling error.  This was a devastating development for the entire team from a point system accumulation perspective.   Each Whitman grappler could have had as many as 10 matches at the Keaser, thus enabling them to accumulate the valuable match points necessary to be on par with the rest of the county teams.  As a result of having lighter overall individual records, three of our eight wrestlers were forced to wrestle into their brackets via a pigtail (which they did so successfully) and some other Whitman wrestlers were ranked potentially lower than their true abilities.

Of the eight wrestlers that entered the Varsity tournament, two Vikings were placed on the podium.   Congratulations are in order to John Luke Iglesias who was crowned the Montgomery County Champion at 220lbs and Yussef Zaki who came home with a nice 4th place finish at 195lbs.  John Luke’s path to victory was arguably the most exciting one of the entire tournament.  Both his semifinal and championship matches went into overtime.  In both instances, John Luke kicked into high gear scoring a takedown in the semifinal OT match followed by a takedown and a pin in the OT of the championship match.  His championship victory was made all the more sweet by the fact that John Luke was able to avenge his only loss of the year by beating Junior Pimentel of the Rockville Rams for the crown.  Good luck to both our big guys Yussef and John Luke in the Regional Tournament next weekend! GO VIKES!