Posted on December 18, 2017 by cindyboinis | Comments Off on Vikings Home Opener vs. Northwest

The varsity lineup is taking shape and hopes are high for another great Vikings wrestling season.  This year’s team is stacked with talent and returning wrestlers as Whitman only graduated two seniors last year.   In addition we have one of largest freshman classes ever, with the team now reaching 43 total members.  In order to accommodate all this talent, Whitman practices have been split up into a JV session and Varsity session for the first time ever.  This provides each wrestler with more individual instruction and mat time to help grow their skills.  And speaking of skills, we have the good fortune of adding Mike Dahlstrom to our coaching staff.  Mike is a recent graduate of American University where he was a Division I wrestler.  Coach Dahlstrom brings a wealth of knowledge and energy to this team and  we are delighted to have him.

With wrestling comes injuries and unfortunately prior to our first contest the team already has sustained several inquiries to key contributors.  At the moment Christian Beske, Thomas Santora and James Mackall are all injured, but all are expected to be back on the mat within weeks.

The season started against Northwest with Senior Captain Clark Boinis at 138 pounds.  Clark started the team in the right direction with an impressive 18-4 margin of victory for 4 points.   Next up was Junior Captain Max Gersch at 145.  This contest proved to be costly as Max was locked in a very physical battle when he sustained an elbow injury midway through the 3rd period.  This injury not only resulted in a forfeit but also may have sidelined Max for part of the season while he recovers.  With Max’s competitive spirit I know he will do everything he can to get back on the mat with his teammates as soon as possible.

Whitman then dropped the 152 match but John Mackall scored an impressive pin in the 2nd period with 55 seconds on the clock in the 160 match bringing the team score to 10 to 13.  Whitman then lost the 170 and 182 matches and it was not until Junior Captain Yussuf Zaki stepped onto the map that the bleeding stopped with a pin in the beginning of the 2nd period to bring the score to 16-19.  Then Senior Captain John Luke Iglesias pinned his opponent in the 2nd period to bring the lead back to Whitman by three points at 22 to 19.

That proved to be the high water mark for the Vikes as we then lost the 285, forfeited at 106 and lost weight classes 113 and 120.  Peyton Casamento was another bright spot in the lineup for the Vikings when he topped his opponent 8 to 1 in dominant performance at 126.  Whitman then lost at 132 and the final score was 26 to 42.  Although the Viking lost this match they showed much better than last year against the powerful Northwest when they were defeated by a score of 6 to 67.

The JV squad did very well and almost everybody was able to get a match.  By my count there were 21 JV matches with Whitman winning 12 of them.  The final JV score was Whitman 56 and Northwest 42. 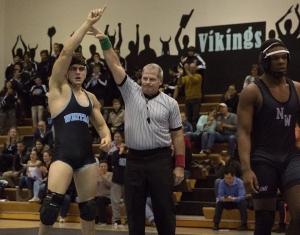 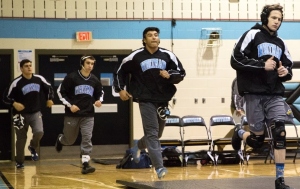