Posted on January 8, 2018 by cindyboinis | Comments Off on Vikings Breakout Performance at Patriot Classic 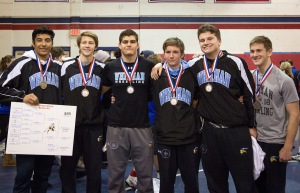 Walt Whitman participated in the 25th Annual Patriots Classic Tournament at Northern High on January 6th.  This tournament seems to be cursed as the weather once again forced this two day tournament format to be held in just one day.  Last year the tournament started Friday afternoon and continued on until well past midnight as a snowstorm was bearing down on the area.  This resulted in an abbreviated format which eliminated some of our wrestlers prematurely.  This year the weather was also a factor as Friday’s wrestling was cancelled which resulted in the entire tournament being held on Saturday.

Despite another condensed format the Vikings made a very strong statement at this silver anniversary tournament, amassing 155 team points and coming in at 4th place in a field of 17 teams.   Whitman Varsity wrestlers placed in 9 of the 14 tournament brackets this year as opposed to only 3 brackets last year.  In 2017 we came in 13th out of 19 teams with only 58.5 points.  This team is definitely moving in the right direction!

The Viking grapplers that placed in the Patriot Classic this year were as follows:

113 – Sean Fleming 5th place with a tournament record of 2-2.  This was the first tournament placement for Sean…..well done Sean!…..I suspect this will be the norm for Sean going forward.

120 – Peyton Casamento 5th place with tournament record of 2-2.  Peyton wrestled well throughout day and faced perhaps the best wrestler in the gym in his second match who was the #2 ranked wrestler in the entire state.

132 Clark Boinis 3rd place with a tournament record of 3-1.  Clark turned in a gutsy performance losing only to the bracket winner from Spalding who pinned all of his opponents except Clark.  Clark also unseated the #2 ranked wrestler in the county from Sherwood beating him twice with a second period pin in his second match up.

138 Matthew Lindstrom 6th place with a tournament record of 1-3.   Matthew faced some tough competition but wrestled well and took his last opponent to the final seconds before losing on points to take 6th place.

160 John Mackall 4th place with a tournament record of 4-1.  Although John placed 4th he was never given the opportunity to wrestle for the 3-4 spot.  This was because according to Maryland Wrestling a wrestler is only allowed a maximum of 5 matches per day, and at that point in the tournament John had already had 5 matches.   Great showing John!

170 Sebastian Turkewitz, 3rd, 4-1.  This was also Seb’s first tournament placement.  Seb competed in one of the largest brackets with a total of 14 wrestlers.  Seb’s only loss was to the eventual 2nd place finisher on points…congratulations Seb!

195 Yussef Zaki, 2nd, 2-1.  Yussef continued to impress the field with his grit and determination losing only to the state ranked bracket champion who pinned all his other opponents but had to settle for a points win against Yussef.

220 John Luke Iglesias, 1st, 3-0.  John Luke once again ran the table and was never seriously challenged in any of his matches.  John Luke has now won the Patriot Classic for the second year in a row and did so this year with three falls!

285 Tom Wilmarth 3rd, 3-1.  Throughout the day Tom was giving up a significant amount of weight to many of his opponents.  However Tom used his experience and speed to get his first tournament medal and capture a 3rd place finish…great job Tom!

Thank you to all our drivers and fans who cheered the Vikings on throughout the day.  The day was certainly a long one as we left Whitman at 7:15am and did not leave the Northern Gym until 9:00pm.  The fans were constantly up and down racing from one gym to the other to cheer our team on.  A big thank you is also in order for Coaches Manon, Sharbaugh and Dolstrom who were kept busy all day preparing our squad for matches and coaching them throughout.

The Viking’s results were exciting and impressive at this year’s Patriot Classic.  All the hard work, practice and preparation time spent by this team paid off nicely and made the day a memorable one …….and the crab soup and our own Lindstrom Barrista certainly helped keep us going during this long day.